On a glorious Friday 23rd October, 2020, the mighty Radio Phoenix at FM 89.5 was graced with Immediate Past President and Greencode Architects Principal, Kelly Kalumba, Ndilila and Associates Principal, Dr. Francis Ndilila and Practicing Architect Musunka Silungwe. Their Purpose was simple to ‘re-educate’ the public on the role of Architects in society.

The Architects were hosted by popular Radio Phoenix host, Luchi on his widely listened to ‘ Let the People Talk’ radio show.

The show was well received by members of the architecture fraternity who have felt for a long time overshadowed with recent events which have left many a spectator baffled as to what the role of architects in industry actually is.

Below is a link to the full interview;

Episode 001 of the Zambia Institute of Architects Podcast

Episode 001 of the Zambia Institute of Architects Podcast, where Mr. Bwalya Masabo of Mas Ventures is Interviewed on what his journey and what value an architect brings to a project has just dropped.

You can Kindly take a peek and provide your feedback on it.

World Architecture day was set up by Union International des Architects (UIA) back in 2005 to “remind the world of its collective responsibility for the future of the human habitat”, coinciding with UN-Habitat’s World Habitat Day. 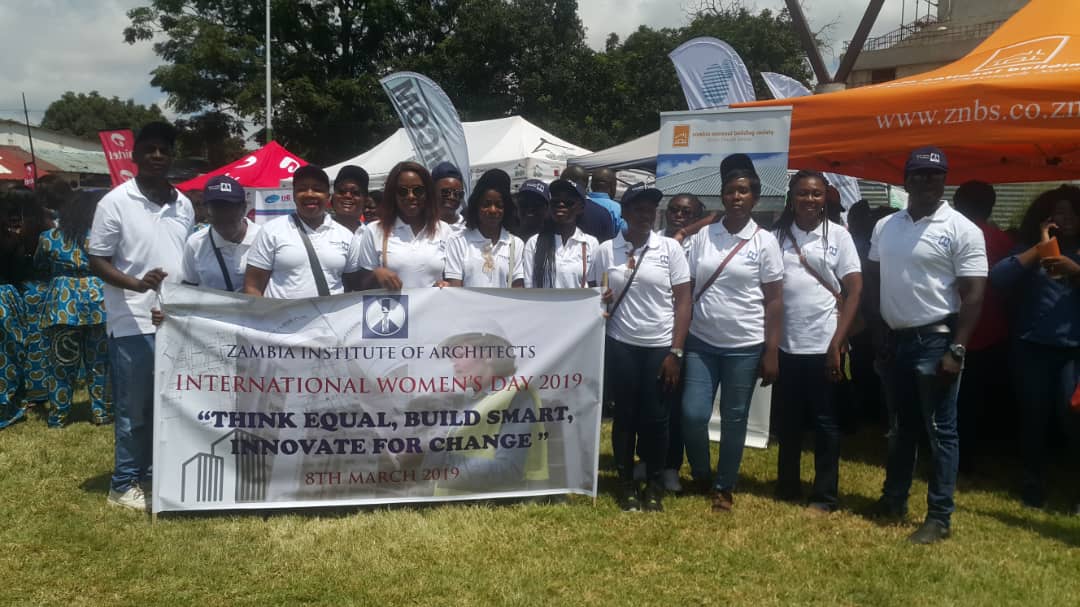 The Zambia Institute of Architects this year participated in the Women’s Day match under the theme “Think Equal, Build Smart, Innovate for Change”. The institute was represented by Female Architects and supported by a couple of male colleagues. The group consisted of both the younger and senior members.

The match started from Zesco Headquarters ending at the Lusaka Show Grounds with a match past in front of the Head of State.

Later in the evening Female Architects were celebrated and honoured by the Graduate Women Zambia for their active role in the Construction Industry at a glamourous fund raising dinner at the Mulungushi Conference Centre.

The Extraordinary General Meeting of the Zambia Institute of Architects will be held on Friday, 5th April 2019 at the New Government Complex, in Lusaka where a new ZIA President will be elected.
The EGM will be preceded by a one-day CPD Event on the 4th April, 2019. The CPD Event will be used to gather input for the ZIA Strategic Plan as well as the SADC Trade Negotiations Forum. Also expected are presentations from the Lusaka City Council on the newly launched Automation of the Construction Permitting System and another from ZRA on Taxation of Consulting Services.
The full programme for the two days will be shared in due course.

The Zambia Institute of Architect (ZIA) was invited to the official launch of the Automation of the Construction Permitting System by the Lusaka City Council (LCC) on Friday 4th January 2019.

According to the brochure distributed by LCC at the ceremony, the Automation of Construction Permit is the shift from handling and processing applications for development manually to the use of online interaction and computerised system.

The processes to be computerised includes-

Applicants are expected to create an online account through which enquiries, submissions, payments and tracking of the application will be made.

To obtain more information about the system visit the Lusaka City Council website at www.lcc.gov.zm and possibly register as a user.

The general public is informed that it is a crime to provide Architectural Services in Zambia in a manner contrary to the provisions of the Zambia Institute of Architects Act No 36 of 1995 (Cap 442) and Statutory Instrument No 106 of 1999 of the Laws of Zambia.

Those found to be in breach of the above mentioned laws will be prosecuted. For more information the public is advised to contact the Zambia Institute of Architects’ Secretariat on telephone no 0211 254512, cell 0966 650728 or email secretariat@zia.org.zm.

ZIA has published a Zambian Hand Book of Practice for Architects (Volume 1) which provides Architects a systematic and appropriate method of executing their services to Clients from inception through to completion. In the hand book the services of a Practicing Architect are structured into two sections namely Job Running and Contract Administration.

Job Running explains the documentation and procedures that are involved from inception or commission of a project with the Client right through to Project hand over and review at completion. The Contract Administration section provides practical guidance on the administering of the building contract which is the agreement between the Client and a Contractor giving rise to obligations to each other enforceable at law. For private projects the hand book recommends the use of the JLC Standard Form of Building Contract while for government projects the GC Works Form of Contract is used.

A Practicing Architect has the direct and individual responsibility to faithfully and diligently carry out his or her duties undertaken in accordance with the terms of engagement with their Client. Architects also have a third party duty of care to persons expected to use or enjoy buildings and facilities designed by them. For example an Architect has a duty of care to provide an access ramp for use by the disabled on wheel chairs even on privately owned buildings. It is for this reason that Architects like Lawyers and Medical Practitioners are expected to practice under the Sole Proprietary or Partnership Type of Business and not as Limited Liability Companies. With the general appreciation of who an Architect is and what it takes to practice Architecture in Zambia follow up articles will explore the tools and standard documents that are available for an Architect to practice their profession and effectively serve their Clients and the public in general.

Over the last few years, New York City architect Danny Collins and his colleague, Javier Roig, have spent their vacations building homes in under-developed regions around the world, volunteering in Cambodia, Zambia, and Nepal. Often, they personally financed the projects, which were typically building single-family homes in needy communities.

That’s how they got the idea to launch Project Latitude, a non-profit that creates products inspired and made by people in struggling areas. All proceeds from the sale of the products go back to the communities, where the money is used to meet the area’s construction needs.

“It’s our response to how volunteer trips are funded,” Collins tells Yahoo Finance.

While traveling in Ecuador, Collins and Roig were so taken with the area’s culture and natural beauty, that they made helping the South American country their inaugural project.

Inspired by the rich colors and textiles of the Andean Highlands, they designed a backpack that they say reflects the lifestyle of the community. The backpacks are handmade locally, and all of the detailing is made from 100% recycled car tires.

To fund the project, they set up a Kickstarter campaign. On April 17, 2016, one day before it was supposed  to go live, a deadly earthquake hit Ecuador. Project Latitude quickly adapted its campaign to help with the relief effort.

“Our passion is in Ecuador right now,” says Collins. “And we decided that we are going to transition some of the funds from the Kickstarter campaign to help the victims both in a short-term response, as in water, food and shelter, and hopefully a longer-term response.”

Rather than building single-family homes, Project Latitude plans to focus on public works and recreational spaces along the coast of Ecuador. “We want to travel there and see what it is they need,” Collins says.

They hope to add more items to the Ecuador product line and eventually branch out to include volunteer projects throughout Latin America.

A Career in Architecture

Architecture is the art and science of designing buildings and the person who practices Architecture is called an Architect. Architects ensure that the buildings they design are functional, safe, and meet the needs of the people who will use them.

Architects also assist their Clients in selecting suitable contractors for their building and during construction they inspect the works to ensure that the builders strictly follow the design and specified materials as well as meeting the acceptable work quality standards. In Zambia the practice of Architecture is regulated by the Zambia Institute of Architects under Cap 442 of the Laws of Zambia.

The history of Architecture goes back thousands of years ago, when man created primitive shelters for protection from the environment. However with the environmental concerns becoming more and more important to many, most Architects now ensure that their buildings have as much reduced impact on the environment as possible, both at design and during the construction stages and when is use after completion.

An Architect is engaged by a Client to design buildings who give the Architect an idea of what he wants. He then starts the designing process where some Architects use old fashioned pencils and tracing papers during this process, while most them now use some type of computer aided design (CAD) software.

In Zambia the Copperbelt University (CBU) offers a five year Bachelors of Art Degree in Architecture. The O level subjects generally required to pursue the Architectural programme are English, Maths, Geography and some Sciences. Background in Technical Drawing may provide an advantage but is not necessarily a requirement.

The degree programme includes courses in Architectural History and Theory, Building and Environmental Design, Structures, Building Technology and Construction Methods, Professional Practice, Analytical Maths and Surveying. Cardinal to the Architectural programme is the Design Studio, where students apply principles and theories learnt in the other courses to present design concepts, drawings and three-dimensional models of their projects.

After completion a Graduate Architect undergoes internship training for at least two years under the supervision of a Registered Architect. This is necessary for one to be considered for registration by ZIA. The Graduate Architect is thereafter expected to sit for the Professional Competence Examination after which they are admitted to the Institute.

Employment opportunities for Architects are available at Private Practicing Firms, Buildings Department, Ministry of Education, Ministry of Health, National Housing Authority, National Heritage and many Other Parastatal Organisations like ZNBS. One can also set up their own Firm or join existing practising architects to set up Partnerships.

Established through an Act of Parliament, No. 36 of 1995 as a corporate body with perpetual succession and a common seal.

Check with the Secretariat for Membership Registrations and renewals.